After experiencing major wildfires in three of the last five years, savvy Sonoma County families have “go bags” stocked in advance with essentials in case they must flee their homes at a moment’s notice.

So do teams at the Sonoma County Human Services Department. But their go bags look a little different. They contain a popup tent, computers, tubs of intake forms and everything else they need to quickly set up a Temporary Evacuation Point, a critical hub in the county’s emergency response.

Opening evacuation centers during emergencies is just one role of Human Services. The agency’s four program divisions provide economic assistance to low-income families; protect children who have been abused or neglected; help older adults and people with disabilities live independently in their homes; and deliver employment training and career services to people looking for work. One in five Sonoma County residents – more than 100,000 people – rely on its services every year.

When disaster strikes, Human Services takes on another critical job: sheltering people who have been forced from their homes. It is a job that has changed dramatically since the devastating October 2017 wildfires, which killed 24 people in Sonoma County, destroyed more than 5,300 homes and forced an estimated 100,000 people to evacuate.

Before 2017, mass evacuations were relatively uncommon in Sonoma County. Most were caused by occasional floods along the Russian River, a relatively slow-moving type of disaster that provides ample time to warn residents and set up emergency shelters.

Since then, county leaders have launched a comprehensive initiative to prepare for wildfires and other disasters that occur without warning. Human Services, in turn, has overhauled the way it shelters people during evacuations, adopting lessons learned from recent wildfires and the COVID-19 pandemic.

As a result, the county has increased the number of resources and quality of services provided at its emergency shelters. It has sought to standardize services, ensuring members of the public have access to the same support regardless of where they seek help. It has integrated trusted community partners into the response and built equity into every facet of the county’s disaster preparations.

“We have learned a lot since 2017 and we’ve worked very hard to be prepared for future disasters,” Struckmann said. “We’re ready to mobilize at a moment’s notice and serve the public when they need us the most.”

Over the last five years, Human Services has sheltered more than 7,800 people during five emergency evacuations, including four fires and a flood. After each activation, the department has conducted detailed reviews to identify what worked well – and what needed to be improved. 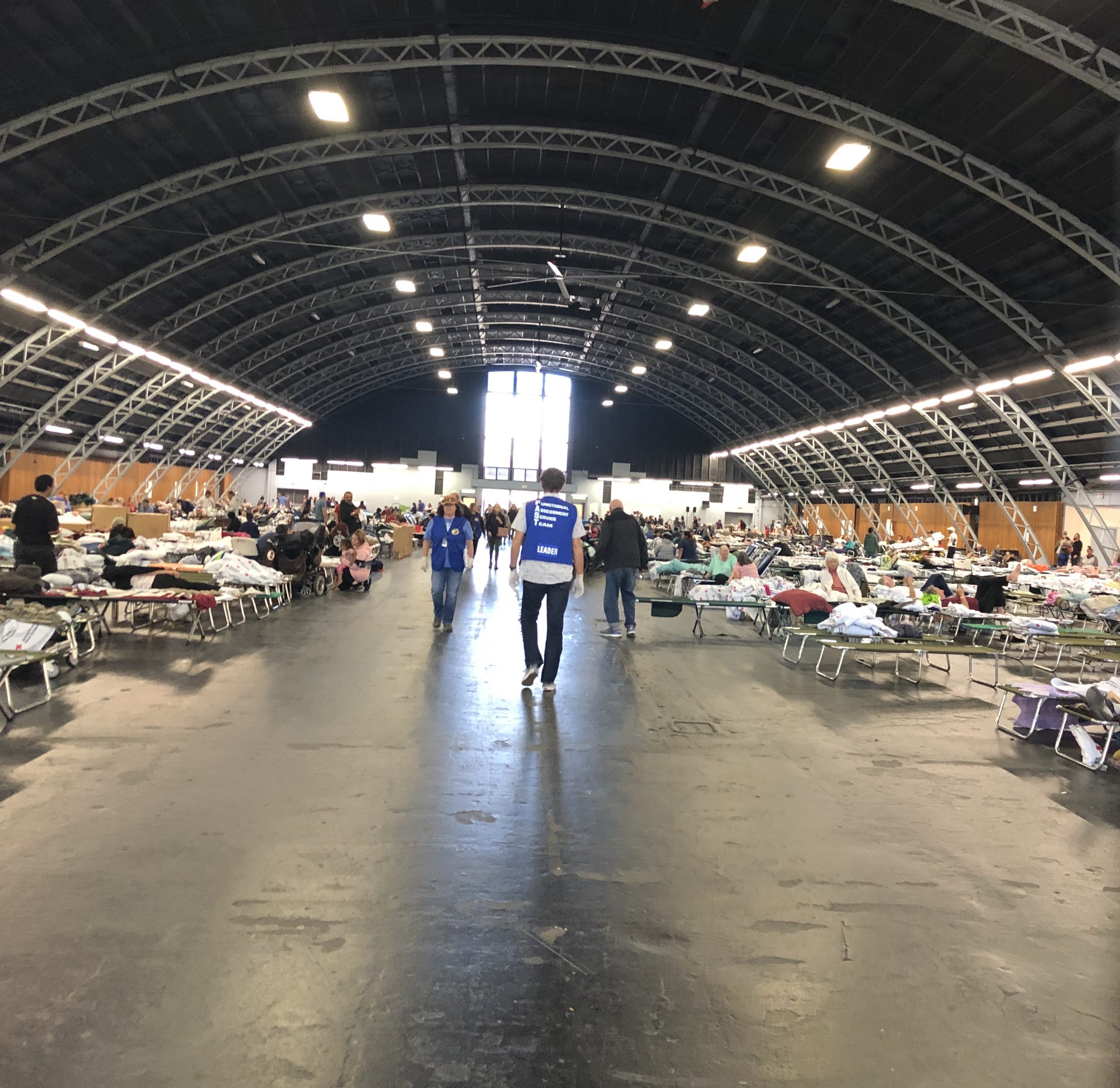 One innovation emerged from the COVID-19 pandemic, when the county began using Temporary Evacuation Points, or TEPs, during the 2020 wildfires. These hubs provide a safe place for evacuees to park and plan their next move. The concept was initially developed as a way to protect evacuees from COVID-19 by diverting people away from mass shelters into non-congregate settings, like hotels or campgrounds. It is now an integral part of the county’s emergency response. A TEP can be opened within minutes, much more quickly than an evacuation shelter, becoming an instant haven for people dislocated by disaster. Usually located in a large parking lot near a major highway, often next to an evacuation shelter, a TEP serves as a triage center where disaster workers can quickly evaluate people’s needs and connect them with services. Evacuees can use a restroom, contact family and friends, and identify a place to stay. TEPs can be located during an emergency by calling 211 or visiting SoCoEmergency.org.

Evacuation shelters have additional resources, including food, cots and blankets. From the minute someone registers at an evacuation shelter, Human Services works to get them on the path to recovery. It revamped the intake forms used at shelters to collect information from evacuees about their expected needs, which provides data that allows the county to direct resources where they are most needed and quickly connect evacuees with government and nonprofit resources.

“The sooner we get people in the queue for services, the better the outcomes are,” said James Cooper, deputy emergency services coordinator with the county Department of Emergency Management.

Each of Human Services’ nearly 1,000 employees is not just a specialist in their regular job. Like every other county employee, Human Services staffers are also prepared to step away from their normal duties during an emergency and respond as a disaster service worker. Disaster service training for emergency work, like sheltering evacuees, is provided to new hires during onboarding and refresher classes are scheduled regularly for existing employees. Some are trained to support people with special access or functional needs, such as people with limited mobility or those who need extra assistance with basic life functions.

The emergency shelter plan places a high priority on equity, recognizing and addressing the disproportionate impacts of disasters on the most disadvantaged members of 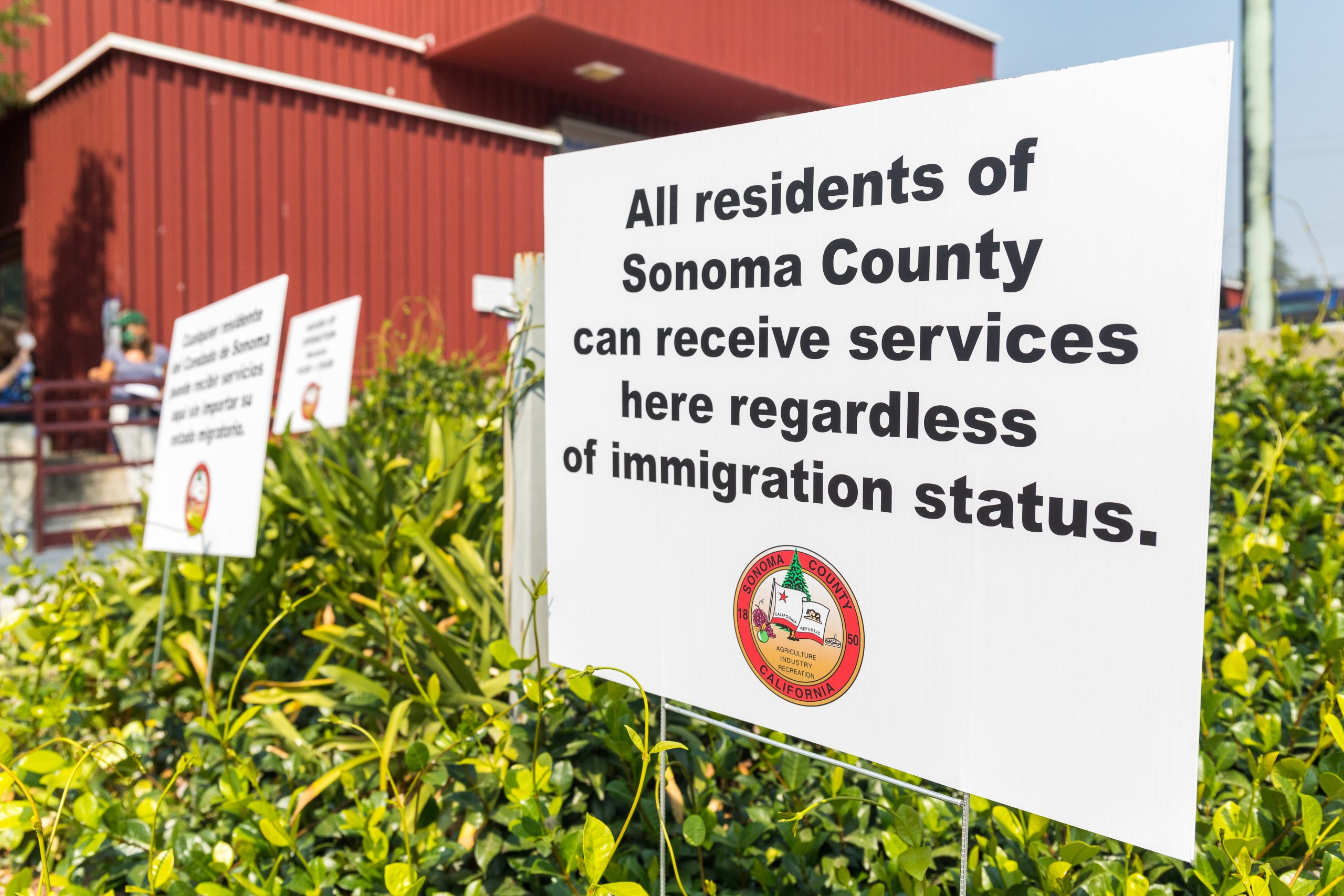 our community. For example, Human Services has taken steps to ensure it has bilingual staff at all shelters, especially at the reception area. The county has also improved signage in Spanish and English at evacuation shelters to let all people know they are safe in the shelter, regardless of immigration status. U.S. Immigration and Customs Enforcement (ICE) officers are not allowed in emergency shelters or other disaster-related assistance operations.

“We want to make all members of our community feel welcome and safe,” Cooper said.

In 2018, the county created the Sonoma County Shelter Council – a working group that includes American Red Cross, city governments and nonprofits – to coordinate and build shelter capacity. The council created a handbook for shelter managers providing guidance on all components involved in operating a shelter, including mass feeding and managing donations and volunteers.

To ensure residents have convenient access to an emergency shelter no matter where they live, the county is working with cities to create the capacity to shelter 5,000 people, equal to 1 percent of the population. The first step was identifying gaps between existing and needed resources, such as buildings, cots, blankets and trained staff to operate the shelters, Cooper said. Now, the county is working to close those gaps through training, purchasing additional disaster resources, identifying more shelter locations and improving the quality of existing resources, he said. As part of that initiative, Human Services has stocked mobile trailers with all of the basic supplies to open several shelters and dispersed them throughout the county, ensuring they can be quickly activated when needed.

In addition to collaborating with cities, the county also works closely with a group of local nonprofits named Community Organizations Active in Disasters, or COAD, to collaborate on disaster preparation and response. Nonprofit groups work alongside county employees in shelters to help meet evacuees’ needs, part of a plan to integrate emergency response provided by community groups and the government.

Maintaining program operations during an emergency is vital for a department like Human Services, which provides essential safety net services to the community. Some of those served by Human Services are particularly vulnerable, including about 6,000 older adults and people with disabilities in the In-Home Supportive Services program. When individuals enter the program, they are evaluated by level of vulnerability, such as whether they live alone or require specific medical equipment. Using that information along with GIS mapping, Human Services can generate lists of people who are likely to be most impacted by an evacuation order, power outage or other emergency.

“We immediately reach out to those clients who are most at risk in a disaster. Our Adult and Aging staff drops everything and focuses on proactively reaching out to clients who may need extra assistance. When disaster strikes everyone knows what to do,” Struckmann said.